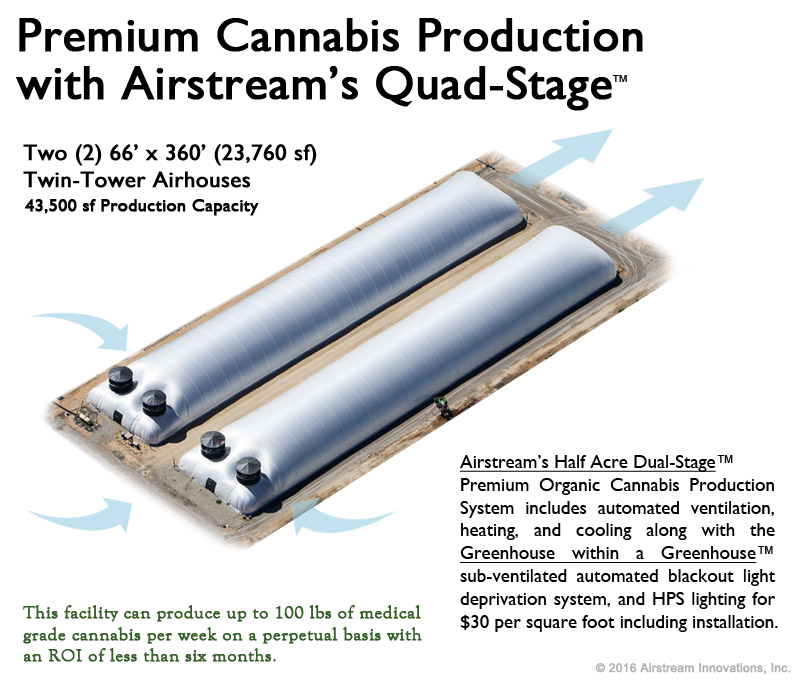 One Arizona client is well on their way to a multimillion dollar payoff using Airstream’s integrated  Quad-Stage™ Positive Pressure approach to cannabis production.  Working within their legally allowed parameters, we designed a one-acre growing operation consisting of two half-acre greenhouses each internally divided by automated blackout curtains creating four quarter-acre growing bays. By staggering propagation they will avoid the risk of over exposure, save on electricity, reduce labor costs, and at full capacity be capable of producing 100 lbs per week of the highest quality medical cannabis achievable. The high-desert climate is almost identical to the conditions in which Airstream technology was tried and tested. With over one million square feet of Airstream’s structures already in full production, the timing was perfect for the maturing of Arizona’s medical marijuana market and their adoption of Airstream’s greenhouse technology.

As burdensome as all the regulations are, and as the requirements and fees continue to dampen market growth, the limited number of state-issued growing licenses relative to the dispensary licenses issued are intended to keep the yields of a few funneled into the licensed dispensaries of the many ensuring every tax dollar possible gets to the state. In Arizona, you can only grow if you live over 25 miles from the nearest dispensary. The state of Arizona has made sure virtually everyone lives within this distance by issuing hundreds of dispensary licenses. In order to make this work, the far fewer-in-number licensed cannabis growers must be focused on growing safely and consistently and at an affordable cost at a large scale. With new operations in Prescott and Tuscon, this is an exciting first step for both Airstream and all licensed cannabis growers nationwide. 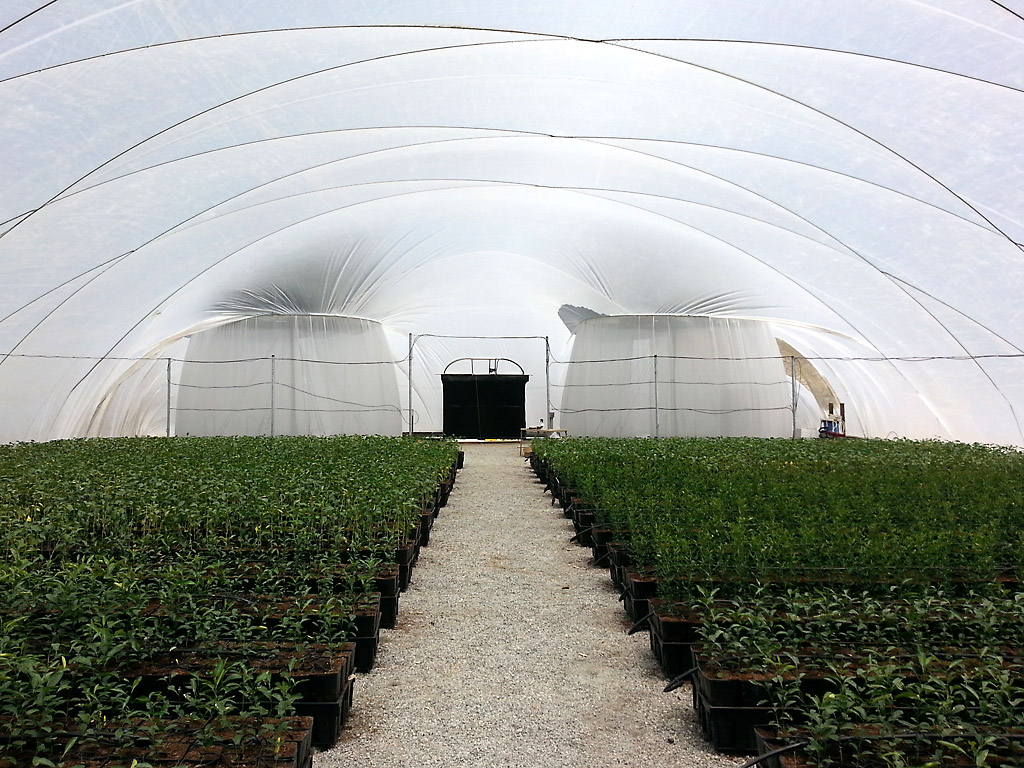 For several of California’s top citrus nurserymen, they chose Airstream because they required scale at an affordable cost with a viable method of protection against the Asian Citrus Psyllid and the HLB disease it carries.  Now, cannabis growers can take full advantage of using Airstream’s built-in pest protection where thrips (2 microns) and larger are stopped before they can ever get to your plants. By law, citrus nurserymen had to have certified pest protection in order to sell their product outside the quarantine area. They not only received that, but because of how these greenhouses worked, they have doubled, tripled and even quadrupled their yields while spraying less chemicals and requiring less water and many other benefits.

Airstream greenhouses are a very affordable solution over the cost of building or leasing and then setting up a giant warehouse or dutch-style greenhouse.  At under 20,000 square feet, many are doing this but the costs are going to squeeze them out unless they think large scale, (20k sf/1860 sm). Imitating growing outdoors by capturing the wind and directing it indoors to inflate a positive pressure structure is a first. At scale, the full benefits of the design work together to maximize yields over any other form of protected farming known. This greenhouse solution is for the licensed cannabis growers (or any other grower) requiring scale for less inputs than conventional methodology and desiring to grow the highest quality possible cannabis or any agricultural product. Large scale also translates to large revenues and when you do this with less inputs than conventional methodology you are beating the competition.